From the Pulpit: A CLASS Intro Training that Miraculously Worked

Boy, do I remember my first CLASS Introduction trainings! I was nervous presenting a new training, and not quite sure about the activities. Many Intros later, I found insight into making this training successful. One of my first Intros was held in a church. I was quite literally “preaching from the pulpit” and the participants were in the pews! I experienced some challenges, but it was a great opportunity to learn how to be a better CLASS trainer.

First of all, the goal of a good Intro is to not only inform your participants (mostly teachers) about CLASS, but to get them excited about the promise of CLASS. I needed to make the Intro more than just a bunch of slides. I needed to make it a credibility pitch for teachers with way too much already on their plates.

This is the story of one of my earlier experiences. And one of the hardest!

Picture it: The training is in a church, I’m at the pulpit, and the participants are filling in the pews. There is a group of teachers in the front row with their arms crossed over their chests, and their eyes told me that if looks could kill I would at least be seriously hurt.

I could see that I had to really put on my best passion speech to convince this hard-sell group that CLASS was not only for them, but was about their children. I wanted them to unfold their arms and actually want to be there.

Luckily, the materials for the Intro training are good. They lay out the CLASS tool sequentially, and gave me the foundation I needed to throw in a few of my own stories and bring the dimensions and indicators alive. I needed the material to include real children so I brought “Johnny” into that church with me, and used him as an example of how CLASS can help all our “Johnnys.”

Here’s one story I told that day:

I told them about a teacher I was coaching who had complained about her Johnny who continually disrupted the other children. I asked her to include Johnny in her classroom footage that was due that week.

She sent me a film that opened up with the children sitting around the table, including Johnny, but she was nowhere to be seen. Johnny was doing just fine for about 30 seconds, and then he dove under the table and did what I can only guess was bite the other children because they started yelling and the mayhem the teacher predicted had begun.

The teacher came back to the table with materials, but things had deteriorated pretty badly by then. After we finished the video, our conversation went something like this:

Me: “Yes, left to his own devices he certainly did cause mayhem.”

But then I asked her a series of questions that got us back to the dimension of Productivity.

Me: “Johnny was sitting quite nicely when the film began, so he was successful for a short time. How could you set it up so that Johnny could be successful for a longer time? What does Johnny like, what does he need?”

Teacher: “Well, Johnny has to have something in his hands all the time, and he can’t be left alone for a second.”

Me: “Okay, it seems like you really know him well. What could you have done to help Johnny be more successful in this activity knowing what you know about him?”

Me: “Okay what could you do to make that happen?”

Teacher: “I guess I should have had the materials out and ready before he sat down and stayed there with them.”

So what were we really talking about there? The CLASS dimension of Productivity; or, more specifically, its indicator that states that Preparation is a key to successful interactions, of course! It wasn’t about a behavioral issue, although it escalated into one. Through some 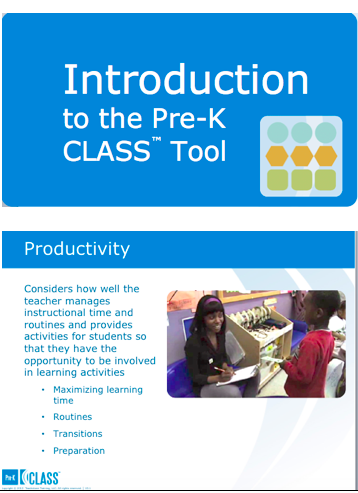 reflection, the teacher found out at least one way to help Johnny, as well as all the other children in her class.

I went on to tell other stories in this Intro training. Johnny, being the typical behaviorally challenging child he is, helped me illustrate how the CLASS can help teachers with their children. Each story built on another and brought what could have been a dry, lifeless training into a compelling case for effective interactions that the teachers could picture in their own spaces with their own children.

To my great relief, the teachers in the front row did unfold their arms, but it was when they started to lean forward and ask questions that I knew I had them. I could have danced for joy!

Many of my Intros start out with resistant teachers, but with good materials, a little passion, a lot of empathy, and a few good stories they succeed.

How do you make the Intro trainings come alive and be engaging to teachers? What stories do you add to your trainings to make them a success?